We are beyond proud: Lucky Dog Rescue is awarded "Best of Scottsdale" for 2022. 8th year in a row. Please click on image for more info: 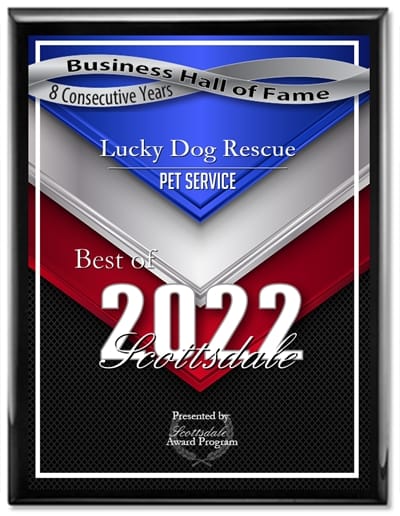 Lucky Dog rescue wins 'BEST OF SCOTTSDALE" for 5th year in a row. 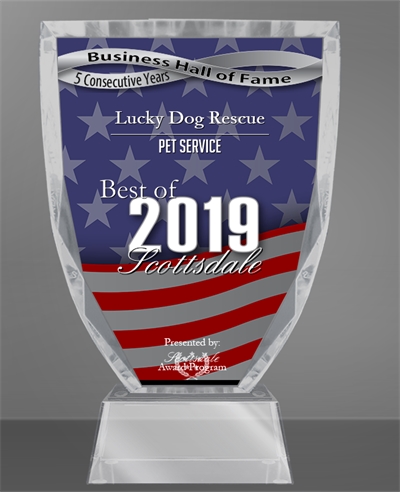 We are proud to announce that Lucky Dog Rescue was awarded BEST of Scottsdale for the 4th consecutive year. Click on image for more info. 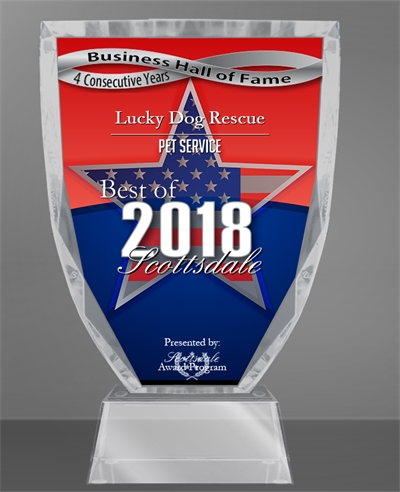 In Loving Memory of our Friend, Foster and Volunteer Erin Ruecklies 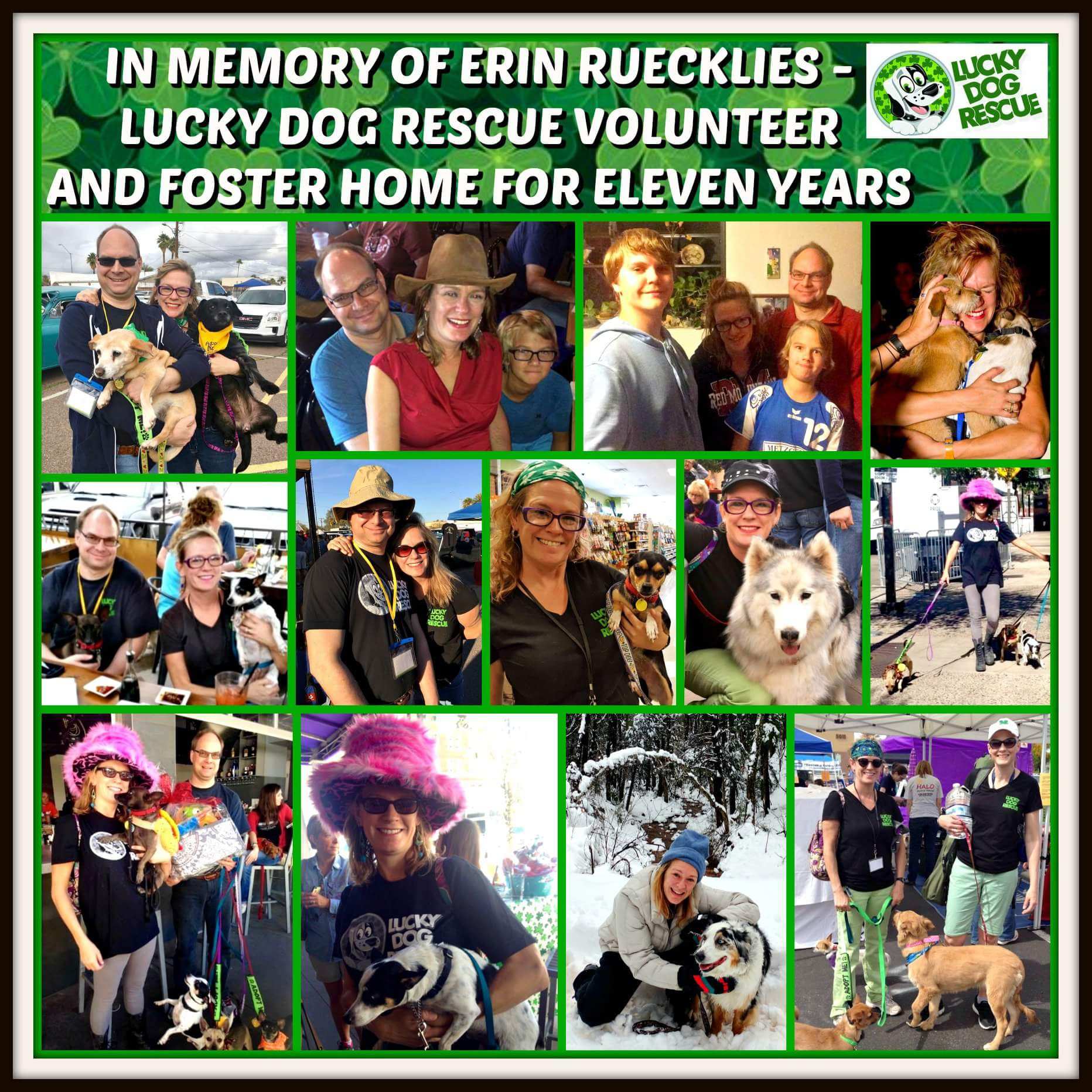 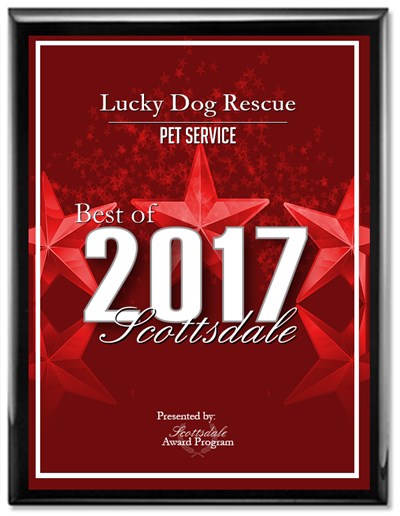 We are proud to announce: 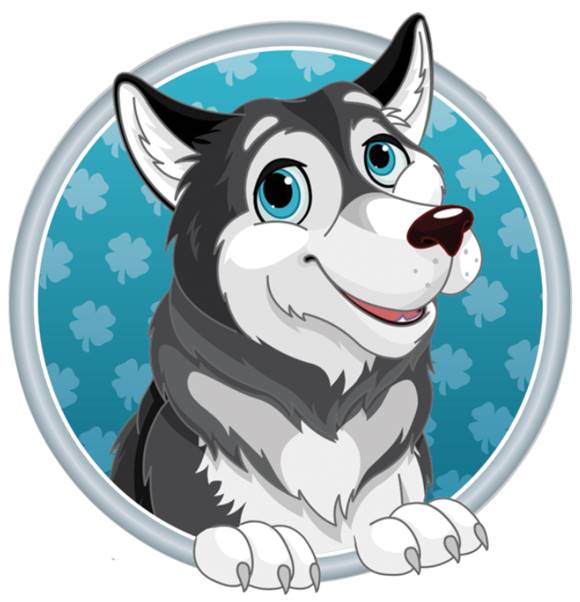 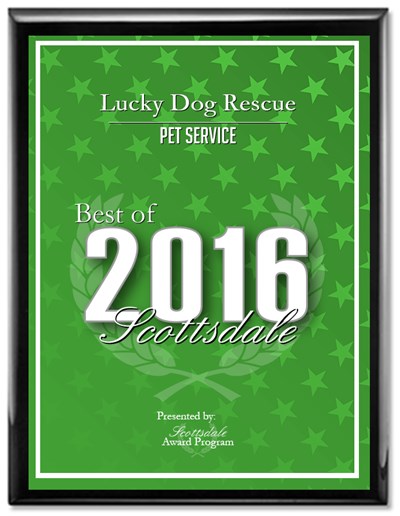 We are a 501(c)3 all volunteer run organization.

All money donated is 100 % tax deductible 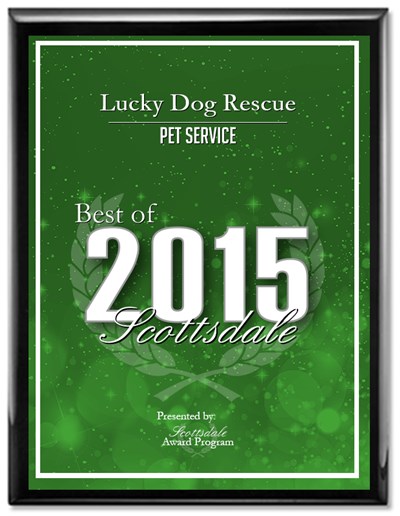 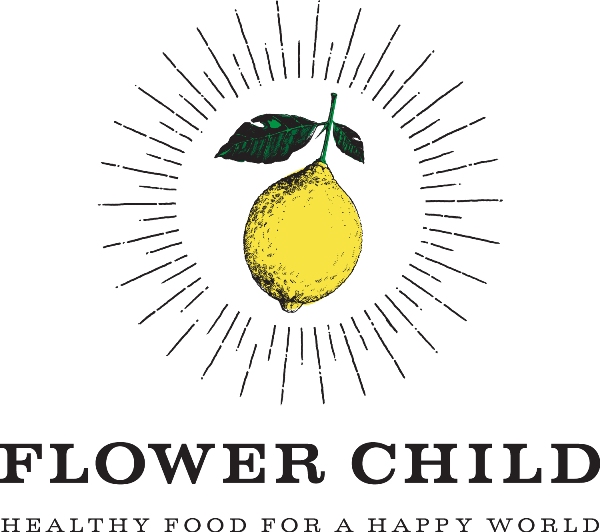 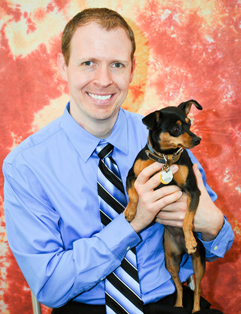 In Memory of my friend,
and volunteer 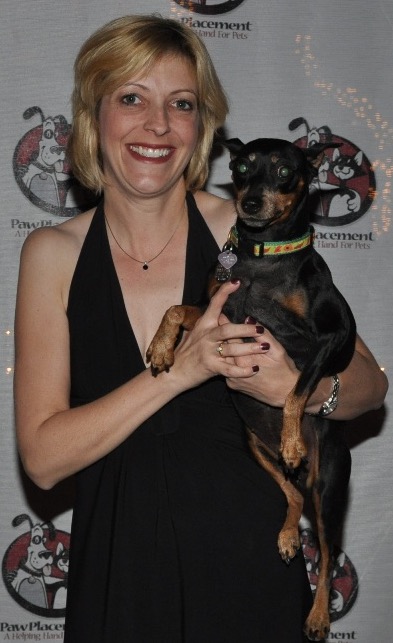 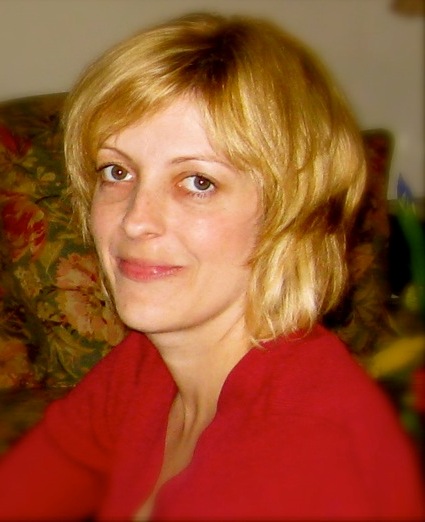 ~~~~~~~~~~~~
View pictures from our fundraiser at the Rhythm Room
http://lovestellarose.blogspot.com/2013/02/lucky-dog-rescue.html 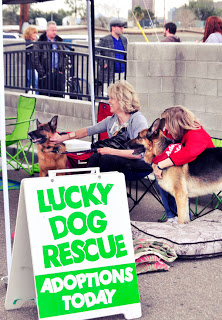 In this section:  About Us  |  Frequently Asked Questions  |  Adoption Stories

A Letter from Darby (aka Champ)

I'm just wanted to take this opportunity to thank you and Lucky Dog Rescue for your kindness in helping me to find a new home.  At first I wasn't so sure about the new place and people, but I soon figured out that everything was going to be OK.   I hope everything is going well with everyone at your kennel and all the other orphans found great homes like I did!

I'm sorry that I haven't written sooner, but we've been busy exploring and I've been a dog around town.  We went to visit Aunt Suki and Uncle Blick at the park next to their house in North Phoenix.  I don't know what they put in the water up there, but they are giants!  That doesn't stop me from having a good time with them though.  We love to run around the yard and wrestle.  Aunt Suki was also an orphan like me up until December.  She is getting the hang of things, but I think she might be a little slow.  She just can't seem to understand how to use the doggy door at the house even though I showed her over and over again how to do it!

Mom and Dad also took me to this amazing park where I got to run around free with other dogs!  I had SO much fun playing chase and running around like crazy.   The only bad part about all the excitement and running around is that I got all sweaty and covered in slobber from some of my less dignified new friends at the park so I had to have a bath when I got home.    As you can see I've also been eating on a much more regular schedule and have gained 7 lbs from what I started at. I'm up to a very healthy 42lbs!

Things have been great here with my new Mom and Dad and I've been enjoying my new door that they put in just for me!   However, at the end of the day my favorite thing is to have some quality cuddle time on the couch with my duck, Quackers.  (Mom and Dad are OK too) Happy new year from the Lincoln family! 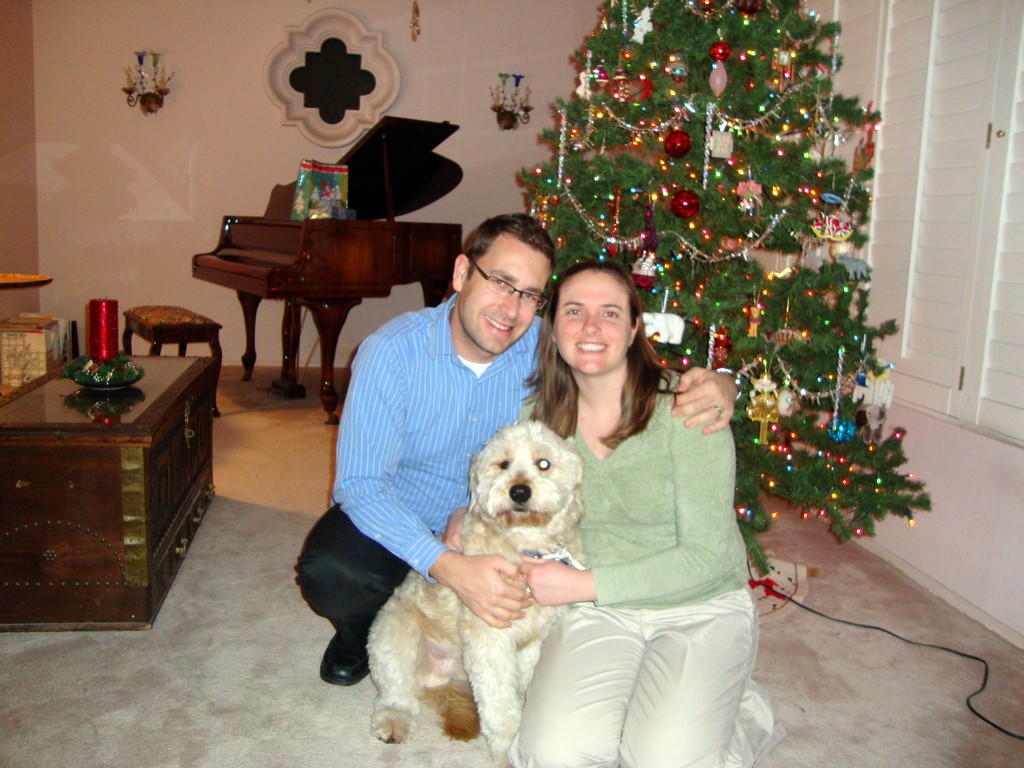 A couple of weeks ago I got an email about a sad little 7 month old Dalmatian on the e-list at the Eastside pound (Euthanasia list) Well, one of our volunteers went down there and we saved the little chap. Despite being terribly under weight and hurt, this sweet little dog was full of wags and kisses.

We did notice right away that there was something wrong with his leg and had our Vet, Scottsdale Vet Clinic look at it. After x-rays we learned it was his knee, it was an old break, probably little Quasi was hit by a car at some point.  Dr. Wright fixed his broken knee with several pins and Quasi was on the way to a full recovery.

You can see his broken knee in this photo.

In the meantime I was contacted by Kathy Rosko who has seen my foster plea and story on Quasi and she told me that office wanted to give Quasi as a gift to their boss, Darin.  ALL of you in rescue are probably cringing right now- we do not give our dogs away as “surprises”. Well, this was different. Linda Lang, a long supporter of PACC911 (Phoenix Animal Care Coalition) had come across this email and passed it on-if she had her hands in it, I thought this is a good thing, besides, this must be one great guy for the employees to throw a surprise party and give this guy a dog (on a side note, Darin had seen Quasi’s photo and fell in love with him) So Kathy and I plotted and last Thursday I drove Quasi to their office and walked in on the Surprise party- the entire office was in on this!  It was the best moment in rescue ever- everyone cheered and Darin’s face was full of joy and love for this little pup that now was his. And oh little Quasi, he just stood there wagging his tail and made his rounds greeting everyone- he is one special dog- he really is. 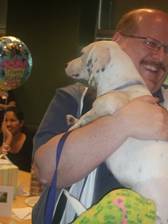 The reason I wanted to share this story was because this little dog could have easily been passed up- skinny, broken knee, runny nose- but what a little gem this dog is and what a great new life he has now. Darin takes him to work every day and he is so loved. 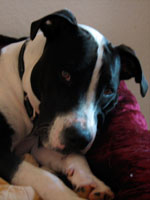 I adopted Spike about a year and two months ago, and you were his foster mom. I just wanted to send you an update and a picture.

First let me say my Mom renamed him, and he is now Ike.  Ike is perfectly wonderful, and a truly great kid.

He has completed intermediate obedience training and is loved by everyone who meets him.  Sweet, mellow and quite a charming guy.

He is also literally a life saver.  Our home was struck by lightning on August 9 and our roof caught on fire (this happened at about 3:50 am).  Ike knew something was wrong, so he pulled the covers off of my mother and grabbed her instep in an attempt to wake her.

She told him to go back to sleep (the fire and CO2 alarms had not gone off yet).  He again pulled the covers off of her and gently pulled at her instep.  The fire department arrived about this time and awakened me.  We are all fine, the fire was extinguished and there was only minor damage, which has been repaired.  Ike turned out to be far more
reliable than our alarm system!!!

Since we adopted Ike, all of our older dogs have died, save one.  Ike really grieved, as we all did, when we unexpectedly lost Sampson, my shepherd mix (pancreatic cancer).  I adopted an English Bulldog/pug mix
when he was 6 weeks old, and a lab pupppy (now 12 weeks)  and Ike is their nanny.  He is very maternal and protective of both pups.

Ike is a bringer of joy, and we couldn't ask for a better chief dog!

Zeller, International Dog of Mystery and Leisure
(aka Jimmy the Dal)

Zeller seems to be making himself at home everywhere. He's decided that he's a little lacking in color, so he's been laying out sunning himself in the yard on the lawnchair 3-4 hours per day. The tanning is not going well, but the relaxation has done wonders for his skin. In this photo he's "being French" which means he's trying to look as aloof as possible while remaining indifferent on everything.

A closer examination of the picture will show that he's been doing a bit of "landscaping" in his copious spare time -- notably pruning a few of the trees (he has his own style, similar to Edward Scissorhands -- look for a bush-shaped duck and elephant in my yard soon,) as well as trimming the lawn. As an aside he dabbles in his hobby which we've dubbed "junior electrician" as he has removed several (OK, all) of the tops of the lights in the yard at some point. Despite our efforts to replace them, he works hard to stay one step (or light as the case may be) ahead of us. He's acquired a taste for bitter apple and is developing an immunity to cayenne pepper, both of which better suit his talents as he begins his quest to dig a hole to China, starting in my backyard.

All in all, he's quite a character, is truly a "people person" and fits in very well with the family. He's earned a Bachelor's in obedience and is applying for a Master's program later this year. We've omitted his other hobby, "bathroom wastebasket fishing," from the applications to Graduate school.